Before I start with this review, I just want to place a disclaimer here: Opinions are subjective and these are my thoughts and my thoughts only, if you disagree, that is great but please be aware I don’t claim this to be the one and only verdict.
But holy hell what a mess this film is.
I love Star Wars but I would never put myself in with the group of toxic fans who go after actors and film makers on social media to spout abuse and death threats. If I absolutely hate something, well, that’s what this site is for and WOW WHAT DID THEY DO HERE.
I felt like I might as well start out with my verdict from the get go so you have an idea of how this review is going to go, lets break it down into positive things and negative things that I personally found from watching the film. Again, this is just my take and your opinion may differ etc etc.

The Good
Babu Frik
Was this character made specifically to sell merch? Yes
Was he intentionally made to be cute/meme-able for the internet generation? – Yes
Does he have any real importance to the plot or do anything any other default character or droid could do? No
Do I still love him? – Absolutely 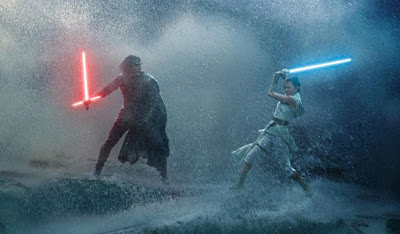 One thing you can never take away from JJ Abrams is he can shoot a good looking film and The Rise of Skywalker is no exception. The production values,  set pieces,  realistically rendered CGI all look phenomenal on screen and save the film from being a complete disaster. The one particular scene where Rey and Kylo are duelling on the ruins of the Death Star with a thrashing ocean surrounding them is spectacular and makes my brain hurt trying to figure out how they filmed this scene.
Score
This is John Williams last outing as the composer for Star Wars and the familiar hits are here with a few new pieces from Williams. An absolute legend of Star Wars who can instantly invoke the magic and fantasy of Star Wars via his music and the score helps The Rise of Skywalker still feel like a Star Wars film despite the many issues the film has.
Adam Driver
Having seen Driver in other films I knew this guy can put in an exceptional performance and the same applies here, Driver is phenomenal and he really helps show the internal struggle of the dark and light simply by his expressions and tone of voice when he speaks, an outstanding performance marred by the poor script and overall movie. Honourable mention to Daisey Ridley who also performs well but her interactions with Kylo were a bit wooden.

Emperor Palpatine
The Dead speak!
Yes that it the first line of the opening scrawl for Rise of Skywalker. Palpatine is back out of absolutely nowhere and now is the big bad threat facing the galaxy. Adding to this, one of Po Damerons lines were “Palpatine is back somehow”
Yes Po, the main evil of the galaxy over the past 6 movies thought dead and not mentioned in any way throughout this trilogy is “Somehow” back. Abysmal storytelling here.
Don’t get me wrong, it was fun seeing back as ol` Paps and speaking some throw back meme lines like “DO IT!”
But the whole start, middle and end of Palpatines arc within this film is poor and just not earned enough, in short, They didn’t put any respek on Palpatines name.
The Plot
Lets face it, the Last Jedi was a bad film and left no real tangible plot to follow on in the following film so JJ had a job on in his hands. The result? JJ made half a film backtracking on the Last Jedi and pretending it never happened by retconning a lot of the plot, the second half of the film then continues from where the Last Jedi should have ended. In short, its a mess. The story moves at a furious pace to get everything changed from the last movie and swiftly moves on to closing the trilogy as fast as it can. Pacing is all over the place and some choices are downright bizarre. One perfect example is a fake out of Chewbacca being killed in an exploding ship caused by Reys Force lightning. Just what the hell was Chewbacca doing walking off for no apparent reason when the scene before was all of them making it clear they are going to get on that bounty hunters ship? Purely for plot, not for common sense. 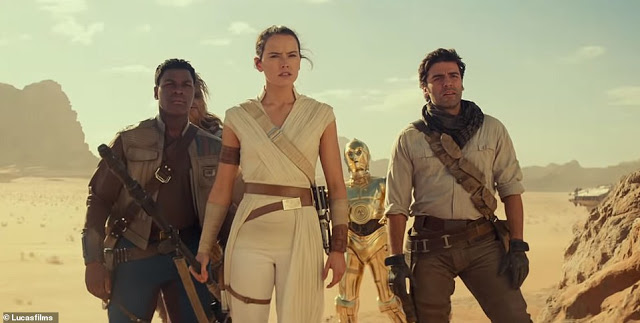 The Ugly
The Jedi/Force
There have been 6 films establishing the lore of Jedi and what they can and cannot do with the force. Add to this the hundreds of TV episodes, spin offs, comics and novels and the powers of Jedi are firmly set in stone. Then here comes the Rise of Skywalker to completely shit on all of those forms of media and decide “I’m the captain now”
The whole reason why Anakin became Darth Vadar was because he wants to bring people back from death such as his mother. A whole trilogy was dedicated to this struggle and how resurrection is a Sith myth. Then here comes Rey and Kylo healing snakes and each other like they taking a stroll on the beach.
Becoming a Force Ghost is something that is done with practice and intense meditation and Qui Gon Jinn was the first to learn this and teach Yoda who in turn taught Obi Wan how to do this.
Then here comes a plethora of Jedi who a far as we know should not be force ghosts but now appear as voices in Reys head, even Asoka`s voice, we don’t even know she’s dead yet but this apparently confirms she is!

It was always going to be a difficult task to write Leia out of the story with the passing of the magnificent Carrie Fisher and JJ showed how difficult it was with how Leia’s arc came to and end.
To give some credit, what they did with Leia and how they used unused scenes from previous films t add her to the plot of Rise of Skywalker was well done until they killed her off.
Out of absolutely nowhere and with complete contradiction to the pacing of the plot, Leia had to go for a lie down to essentially die. The only clue we get as to what is happening is when Maz Kanata (remember her) tells someone that she knows what she needs to do and its time or something like that. Then, once she projects to Kylo to turn him to the light, she disappears to become a force ghost. At least that’s what I think happened. It was awful and didn’t really provide a fitting end to such a fitting character and person.

New Trilogy Characters
So we have Rey, Finn, Po and Rose, lets see how they end up in this movie shall we?
Rey – Super powerful Jedi out of nowhere with a yellow lightsaber and takes the surname Skywalker even though the message of the movie is supposed to be that names do not matter. Oh she’s Palpatines granddaughter. Wait, someone had sex with Palpatine??!
Finn – Appears to be force sensitive but nothing comes of it, meets a new love interest, the most interesting part of his back story; a rebellious storm trooper goes nowhere
Po – Becomes general after Leia dies, commands the remaining rebel fleet and then subsequently the big ass macguffin fleet that comes at the end to help. Apparently he was a drugs runner when he was younger an we probably would be shocked or cared if there was any actual character development.
Rose – Introduced in the Last Jedi as a beacon of hope, love interest to Finn, absolutely hated on and bused in the real world by idiot fans. Just a background character in this film, has no real impact and if she wasn’t in the film, no one would notice.

The Rise of Skywalker FEELS like a Star Wars film via the music, cinematography and numerous fan service moments however, a poor plot going at a hundred miles per hour combined with retconning the previous film and the whole Jedi movement in general results in a mess of a film with not making us care enough for any of the new characters or even the fact that Palpetine is back. It looks like Star Wars films are taking a hiatus and that is definitely a good thing.

One reply on “Review: Star Wars: Rise of Skywalker”

I don't disagree with a lot of what you said here man. I enjoyed the film but it is an absolute mess, there's at least two films worth of content here. I wish that a lot of what had been rushed through in this film had been included in TLJ and given more time to breathe (and make sense…)